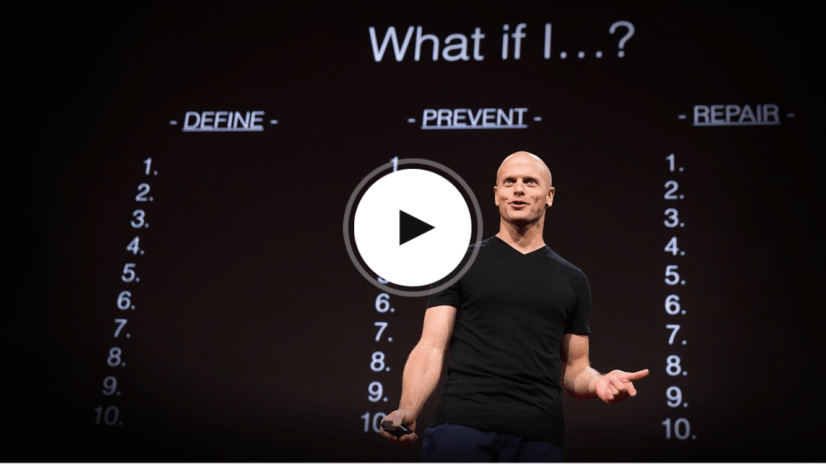 If you looked at the title of this blog and thought “What is fear-setting?” you are probably not alone. This was a foreign concept to me as well before I recently watched Tim Ferriss describe fear-setting in his TED Talk, “Why You Should Define Your Fears Instead of Your Goals”.

Tim began his talk by discussing a time in which he had suicidal ideation and went as far as creating a plan to commit suicide. He said that it was by chance that he did not follow through with that plan. Tim has Bipolar Disorder and was referring to one of his depressive episodes. He reported that he has had about 50 depressive episodes in his lifetime and was eager to find a way to manage the highs and lows he experiences. His main goal was to find a recipe to avoid self-destruction and self-paralysis.

He began to learn more about the concept of stoicism. He learned that stoicism is an operating system for thriving in high stress environments and making better decisions.

Then, you do exercises around what you can’t control. This decreases emotional reactivity, which Tim refers to as a “super power”.

Tim also latched onto a concept called Premeditatio Malorum. This concept involves taking your fears and visualizing the worst-case scenario in detail, so that you can overcome paralysis and take action. He created a written version and called it “Fear-Setting”. He details exactly how to do his written version in the Ted Talk.

Near the end of his talk, Tim says that he can trace all of his biggest wins in life back to fear-setting.

He now knows and understands that some fears are well-founded, but believes you shouldn’t come to a conclusion until first putting your fear under a microscope.

I couldn’t agree with this more and will certainly use Tim’s concept moving forward in my work as well as in my own personal life.

Check back for Part 2 of this blog series, where I will highlight the exact steps of fear-setting and a few discussion questions that might help you brainstorm how to apply this concept to your life.