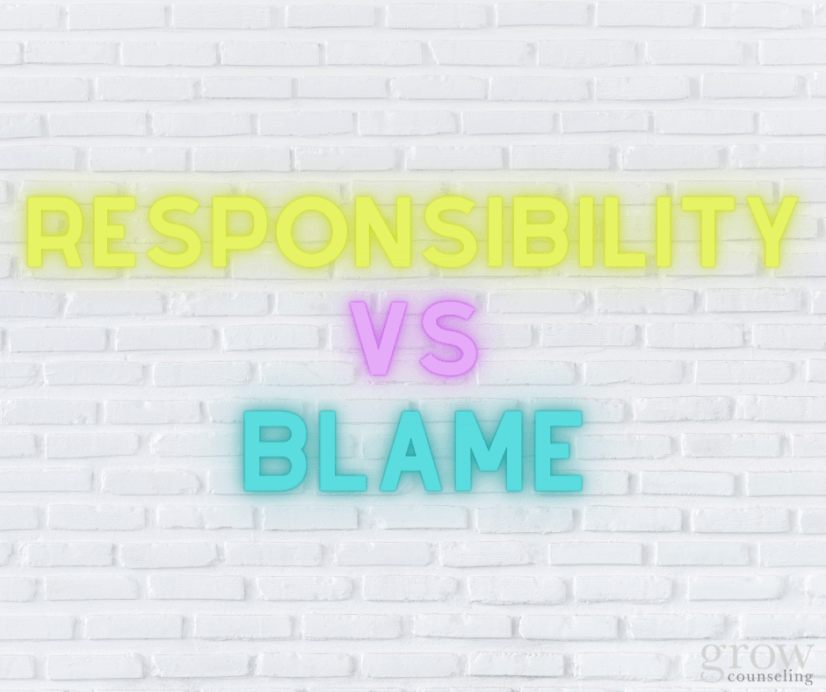 Recently, I’ve been talking with many of my clients about the difference between blaming and assigning responsibility.  This can be a difficult distinction to make, but is a very important one.

Responsibility over your actions means accepting your role in a negative interaction, owning when you make a mistake or hurt someone either intentionally or unintentionally, and doing what is in your power to correct the situation.

Taking responsibility over something does not mean that you have to prostrate yourself, that you then have to carry the entire burden of the situation, or that you are somehow broken. It does require you to look at yourself honestly, to try to empathize with the person you’re in conflict with, and to be honest about mistakes, blind spots, and biases you have.

Blaming yourself or someone else inherently wipes the non-blamed individual free of any culpability, while the blamed individual shoulders the entire burden of the situation. Blaming others can cast you in a victim role, which keeps you stuck in bad situations, or can create an inordinate sense of guilt over things that are not entirely your fault.

Where blame vs responsibility comes up most for most of us is in the course of daily life. Simple interactions with family members, coworkers, and friends are the times when we are most likely to get stuck in unhealthy patterns, and it can be tempting to blame rather than own our role in the negative interaction.  “If she would stop interrupting me, then I wouldn’t have to yell at her. It’s her own fault she’s crying!”  “He is such a jerk- I just wanted to respond and then he freaked out and started yelling.  He never cares about how I feel!”  Both individuals feel like the victim and blame the other, and the cycle repeats itself.

When we are able to own our own role, then it can create space for the other person to do the same.

“I am sorry I yelled at you.  I was frustrated at being interrupted, but I should have taken a time out rather than raise my voice.  Next time we are discussing, I will let you know if I’m getting frustrated and take a breather.”  A comment like that could open the door for: “I know you get annoyed when I interrupt you. It is a really hard habit for me to break, but I also do want to hear your opinion and what you have to say.”

Stay tuned for part 2 for some suggestions on how to take responsibility instead of blaming.