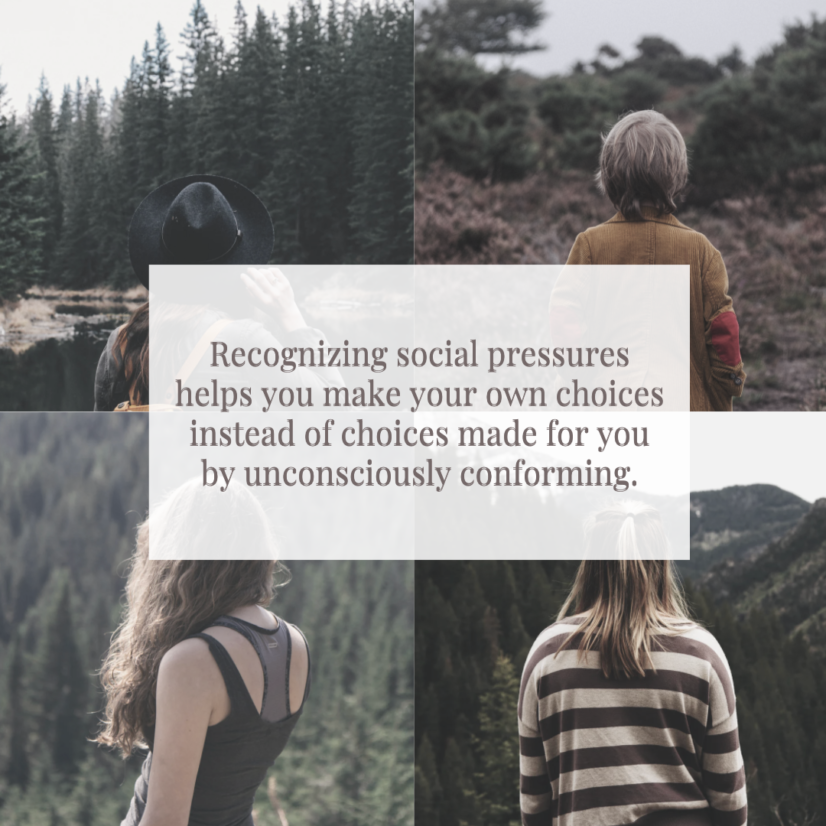 It’s no secret that many people want to be accepted and belong. We are social creatures, and while our motivations for acceptance and belonging are complicated, they are frequently developed through navigating invisible social rules concerning what is acceptable or not.

Social pressures often encourage us to conform to social norms and can be a double-edged sword.

For example, social forces can influence us to act in ways that are courteous and kind. But, on the other hand, this pressure can make people act against their beliefs or values to avoid judgment or exclusion. In addition, the anxiety and fear of ostracization might lead people to self-censorship or demonize a person who voices a different opinion.

In the 1950s, the Ash Line Study – Conformity Experiment found that people would go so far as to knowingly give the wrong answer to questions, presumably to avoid standing out. Unfortunately, conformity is a powerful influence that many of us are not immune to and can have unintended consequences that may not be beneficial. One of those consequences is that it can keep us from saying what we think.

Since the 1950s, many things have changed, and now, similar scenarios are playing out on social media. Unfortunately, this pressure to conform has us projecting an idealized image for approval rather than being authentic.

“Through the ever-increasing gaze of a pervasive audience online, we may become overly pressured, even coerced toward collective opinion, as social media’s mechanism of likes, dislikes, friends, and followers constantly subjects us to the crowd’s judgment along with that gaze.” – Jeremy Weissman, The Crowdsourced Panopticon

These are powerful drives within us all. However, if we’re not careful, we can fall into conformity without question, seeing everything through the lens of our group identity rather than as an individual. This 1950s experiment helps us see the strong but subtle influences that shape our behavior, view of ourselves, and perception of others. Social media is not the enemy, and there are apparent benefits to connecting and sharing information so effortlessly.

It is often hard to answer the question, “Who am I and what do I want?” with all of our competing drives, needs, information, and influences.

For example, if someone in your life rejected you, you might have a hunger for acceptance that may have you acting outside your values or acting to get likes. But, generally speaking, I have seen this lead to individuals feeling more anxious or depressed. In contrast, most clients that come in are wanting to improve self-esteem or become more assertive.

According to Dr. Dan Siegel, “Awareness gives us the ability to make a different choice.” In that case, recognizing social pressures that shape your behavior helps you make your own choices instead of choices made for you by unconsciously conforming.